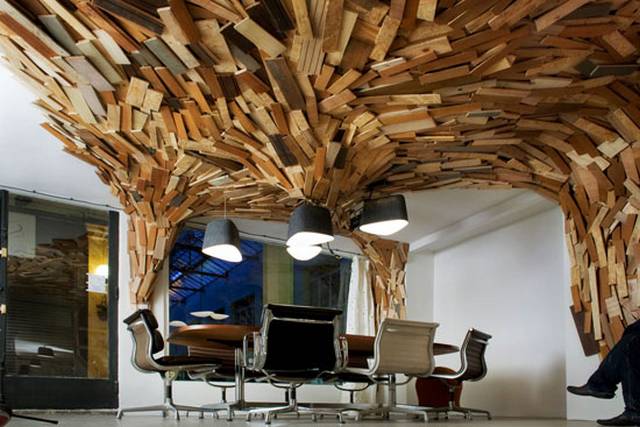 The “Bears Cave” is a stunning interior office design project that was recently completed by French architect Paul Coudamy  on behalf of Bearstech, an internet hosting company located in Paris.  The goal of the office design was to create a headquarters that communicated a feeling of strength by reflecting Bearstech’s innovative and wild approach to virtual technology.The office is organized into three spaces, a working space, leisure space, and a meeting space.  The back room provides a mineral atmosphere with Parisan rock and brick walls, a stark contrast to the chaotic cavern walls of the front meeting room which were created with wood cut-offs rescued from sidewalks, dumpsters, and wasteland, the structure of which was intended to translate “the chaotic mass power dynamited in an uncontrolled energy: a wood vortex our of a natural disaster“.A low honeycomb cardboard bench along with a vibrantly colored yet low-key bar area separates the meeting room and the working spaces, effectively creating circulation between the three spaces. 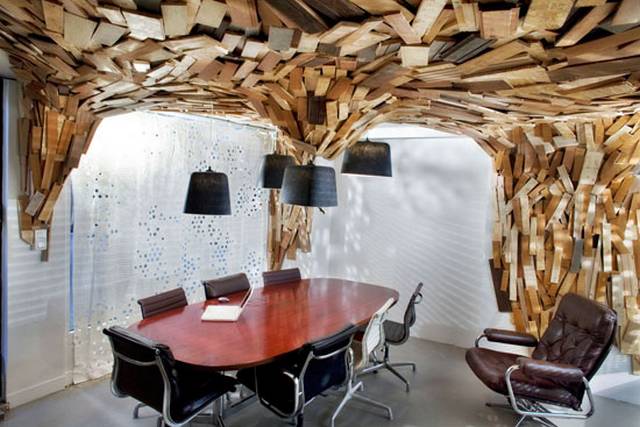 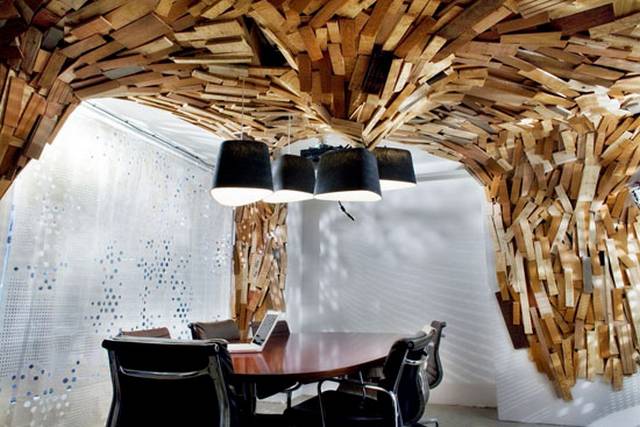 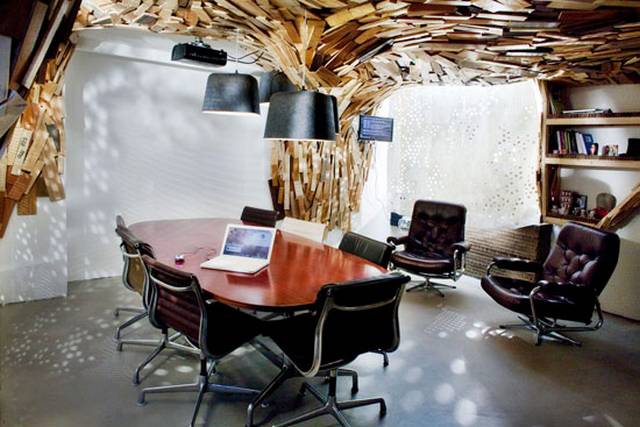 He created furniture, twenty work stations, partitions, meeting rooms and storage using 4cm thick water-resistant honeycomb cardboard mounted with wood glue and tape.Paul Coudamy works on a wide range of projects and inventions.
From object design, interior architecture, experimental devices to artistic installations.The project is located in a covered alley in the 2nd arrondissement of Paris, described by Walter Benjamin. It consists in rehabilitating a shop into headquarters for a computer firm. The idea is to reflect Bearstech Company innovative and animal image in order to promote the wild and raw aspects of their approach of virtual technology and communicate a feeling of strength. 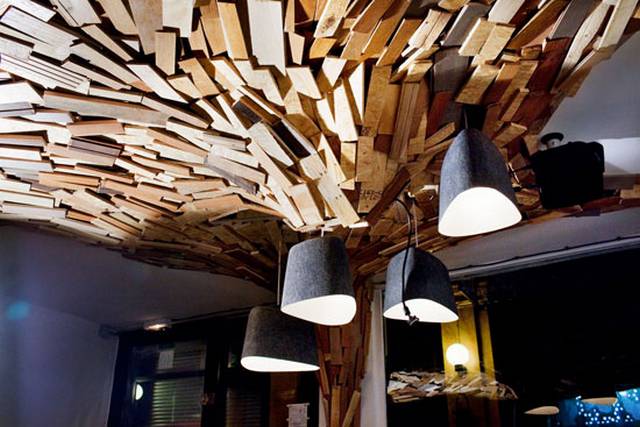 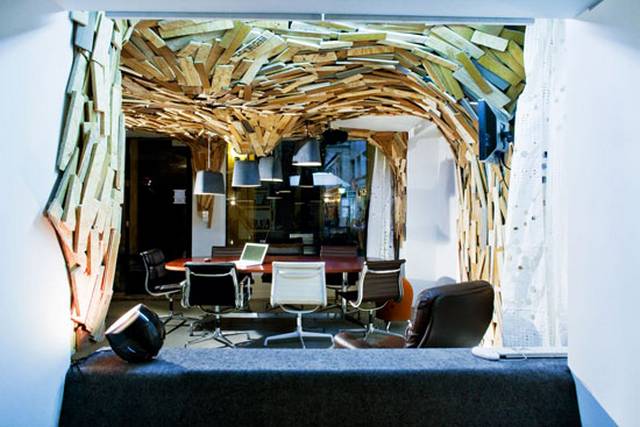 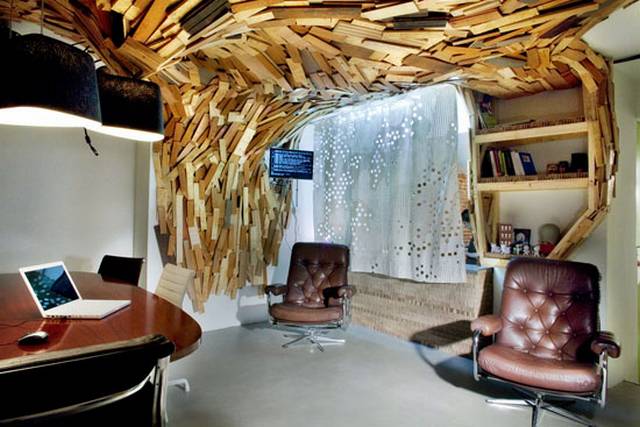 The cavernous and intimate atmosphere is organized in three different spaces : working space, leisure space and meeting space. The back space, more of a serious space, is emphasized by Parisian rock and brick walls creating a solid and mineral atmosphere.
A honeycomb cardboard bench creates a low separation between the meeting room and the working spaces. The bench customized and covered with natural felt invites to take place behind the bar, which by its vivid color and angular form activates circulation between spaces.The meeting room wood structure intends to translate the chaotic mass power dynamited in an uncontrolled energy : a wood vortex out of a natural disaster. The cavern walls are generated day after day by wooden floors and wood waste pieces collected in dumpsters, sidewalks or wastelands. The anarchical and spontaneous organization of the wood pieces creates an organic cave providing an unique atmosphere to the meeting room. 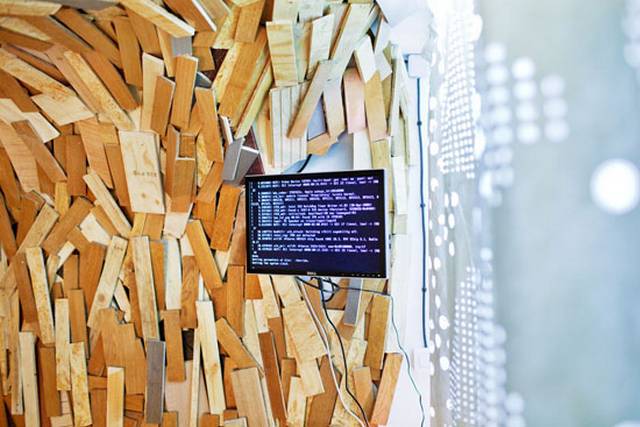 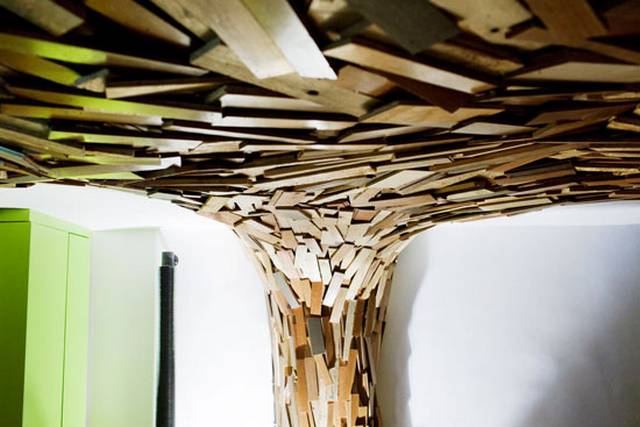 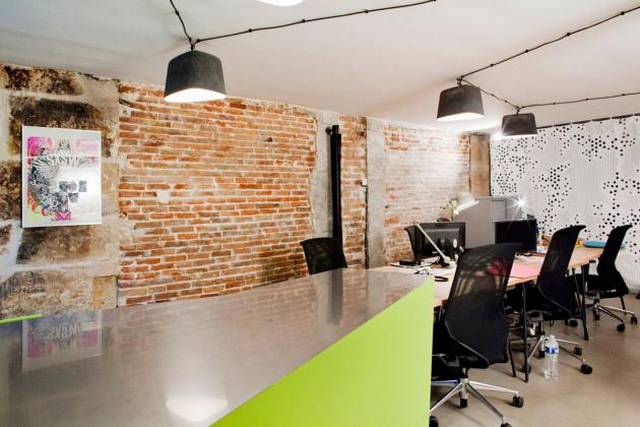 Maintaining your home’s temperature through the changing seasons is essential for your comfort and safety. Homeowners must consider it a top priority since many...

Why AC Maintenance Services is Important on Time?

You love your AC and the cool air it gives you, particularly during the steamy summer months. You are confident that it will turn...