The Macau Pavilion at Shanghai World Expo designed by Chinese firm Carlos Marreiros  will take the shape of a jade rabbit lantern and it will change colors to present a mythological world. The ‘Lantern of the little rabbit’ won the 1st prize, July 2008.The design was inspired by rabbit lanterns popular during the Mid-autumn Festival in south China in ancient times, officials said. In Chinese mythology, the jade rabbit is a guide at the front of Nantianmen, the door leading to a fairy land. 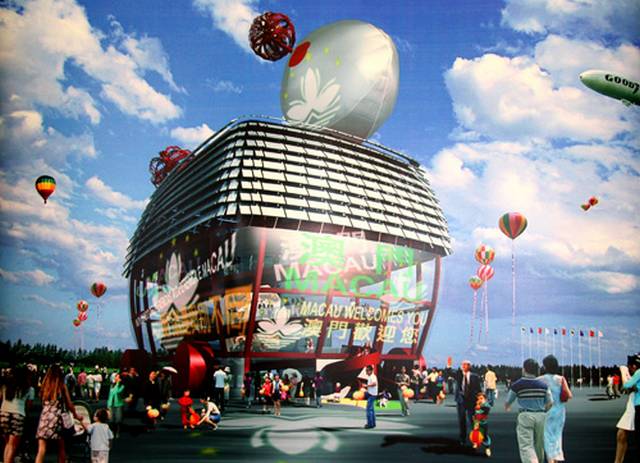 The pavilion will be wrapped with a double-layer glass membrane and feature fluorescent screens on its outer walls. Balloons will serve as the head and tail of the ‘rabbit’ and these can be moved up and down to attract visitors.The pavilion will be eco-friendly with recyclable construction materials as well as solar power panels and rain collection systems.Provinces and cities in China will get 600 square meters each to showcase their varied cultures and traditions. 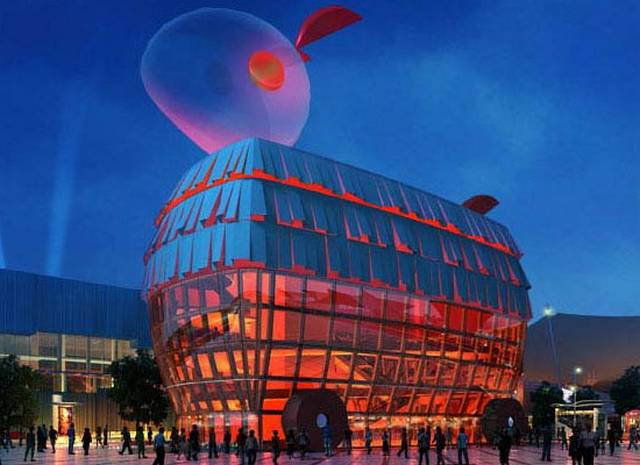 The 10,336 cubic meters Macau Pavilion has been especially built for the World Expo in China. It is covered by a double-layer glass membrane and fluorescent screens. Its 20-meter high symbolizes Macau’s return to the Chinese mainland in 1999. The exterior of the pavilion is made of thousands of LED lights which change colors to create a splendid show. The design of the building was inspired by rabbit lanterns, which were popular in southern China in ancient times. Avant Video Systems, an Israel-based integrator company, was in charge of the entire Medialon set-up and AV devices integration. AVS is now in charge of supervising the system during the Expo.Two Medialon Manager Pro allow to control over 130x Sanyo projectors, 130x PCs running Dataton Watchout system, 20x plasma screens, 2x BINLOOP video servers, 2x fog screens, 5x BSS London Audio processor, 1x PLC system used to control the indoor motorized Rabbit lantern, as well as the entire lighting and sound systems installed in the pavilion. 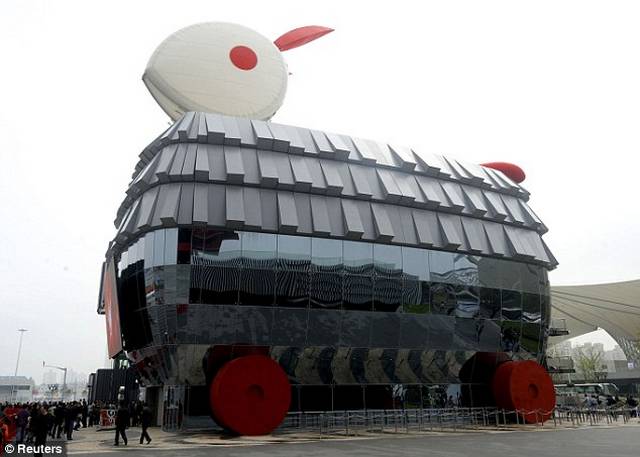 • The Macau Pavilion, a symbol of modernism and cultural values, has been technically crafted to be a mammoth screen for the projection of a plethora of images on the outer and inner boundaries.

• The designers and architects of the Rabbit Lantern made use of robust, state of the art multimedia solutions instead of other exhibit types to prevent people having to stay too long inside the pavilion.

• This was the prize-winning entry at the Macau Pavilion Concept Design Competition with the Dancing Lotus by designer Chio Wai tong and Glitter by Ana Ramos da Fonseca coming in second and third places respectively.

• The core designer of this structure, Carlos Marreiros worked in collaboration with the popular Tongji University, in Shanghai that is renowned for its prolific engineering and architecture disciplines for the design and development. Together Carlos and two project teams from the university worked on the conceptual framework including the crafting of multimedia content.

• The ace architect, Marreiros previously worked with the Portuguese government for large-scale endeavors like World Expositions of Tsukuba in 1985, Seville in 1992 and Lisbon in 1998.

• The Macau Pavilion has been built ‘green’, which makes it environment-friendly as manifested by its steel structures, signage posting, lack of physical signs, acrylic paint with no traces of gasoline, and double-glazed windows.

• The Rabbit Lantern’s head and tail are specially concocted using airship-construction material molded into flammable expandable gas balloons that can be removed during extreme weather scenarios like hurricane or storms.

• The Pavilion is removable; it can be pulled down and shifted to a different site. This was done so that the structure could be easily transferred to another location after the closing of the World Expo.

• The specific Rabbit Lantern design is an inspirational aesthetic manifestation of the conventional lanterns used by Chinese during the annual Moon Festival celebrated on the 15th day of every month in the lunar year.

• The traditional lantern is created using colored paper that is shaped into an animal with a candle lit in the center that glows and lightens up the streets. Since rabbit is most famous by virtue of its high significance in Chinese Mythology, the structure made use of the particular design element featuring the revered ‘rabbit’.

• The rabbit lantern is a cultural asset and a valuable figure related to the Moon festival, especially in southern regions from Guangdong to Jinjiang, as it has strong heritage roots in these areas. In Macau, the tradition of lighting up lanterns is highly popular amongst children. Whether Portugal, Chinese or any other nationality, the tradition has been passed down through generations.

• The architect Carlos Marreiros used the popular cultural figure as an inspiration for the Macau Pavilion for this particular reason. Additionally, it is complicated and costly to design owing to the fact that it has rollers or wheels at the base and a head that bobs up and down a spring.

• According to the designer, the rabbit meets the organizational requirements that indicate the petite size and savvy and argute aura symbolic of Macau. The figure is a heavenly entity with colossal cultural significance that, like the inhabitants of Macau, is a placid and prehensile problem solver. 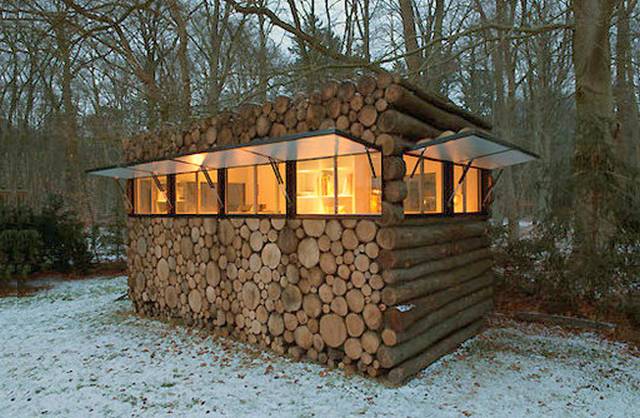 This rustic cabin design was built by Piet Hein Eek for friend, client and musician Hans Liberg who needed an inspiring and cultivating place to “play.” There isn’t a whole lot to this simple, wood cabin design. Surrounded by forest, this timber house’s facade is characterized by cross-sections of stacked logs. A row of window clerestory windows features top-hinged, horizontally swinging shades that flood interiors with natural light. Inside, this compact cottage design contains the one thing this nature dweller needed for survival – a recording studio! And if ever Liberg needs some new inspiration for his melodious compositions, this modern mobile home goes where the music takes him thanks to integrated wheels on the bottom. Composed of stacked tree trunks, the exterior is supported by an internal metal frame. The compact interior, decked out in a cheery pale blue is constructed from plywood. Panoramic windows at seated eye-level afford stunning views of the forest, while benches are upholstered with a patchwork of fabrics in the style of Eek’s Crisis Sofa. Fitted with wheels – to evade building regulations and council tax – the structure can be moved when needed. 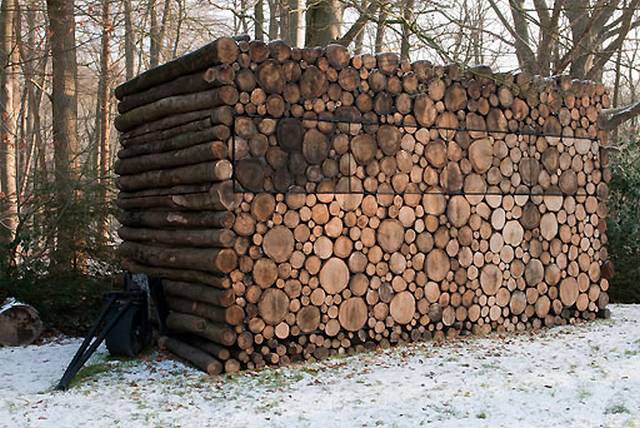 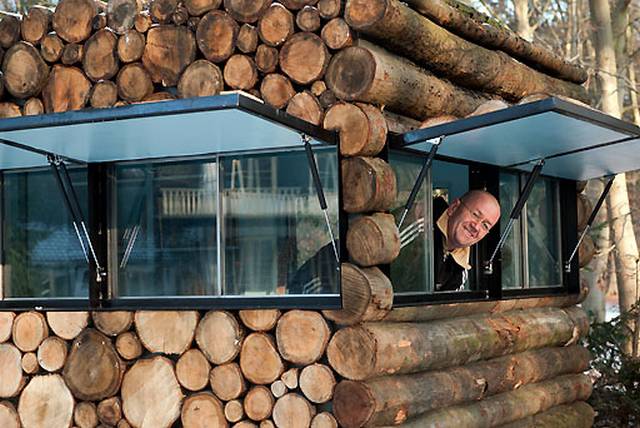 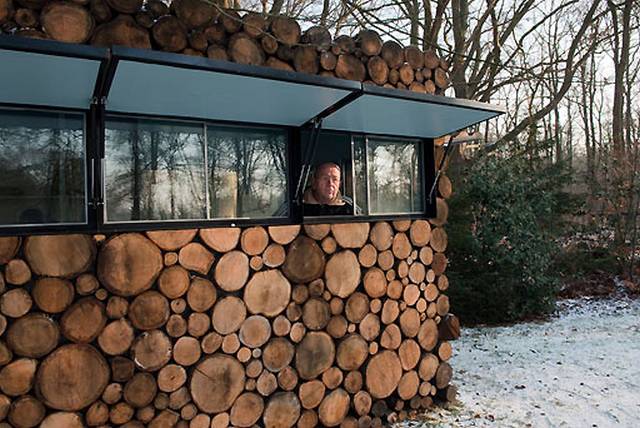 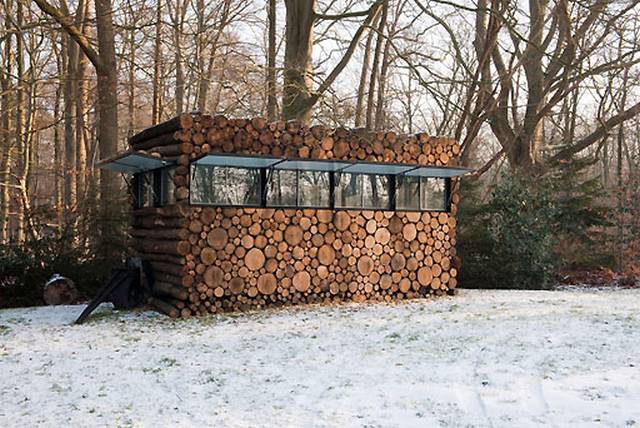 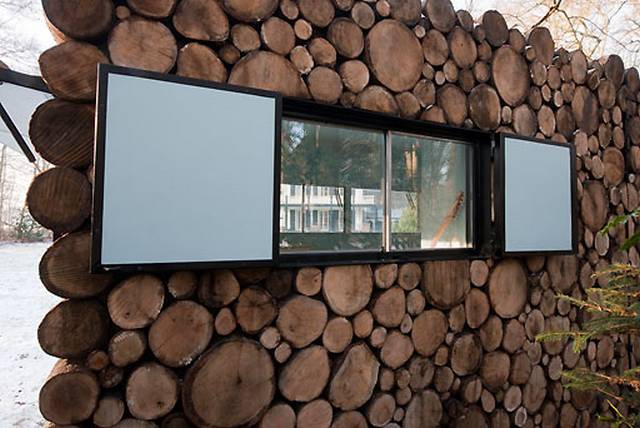 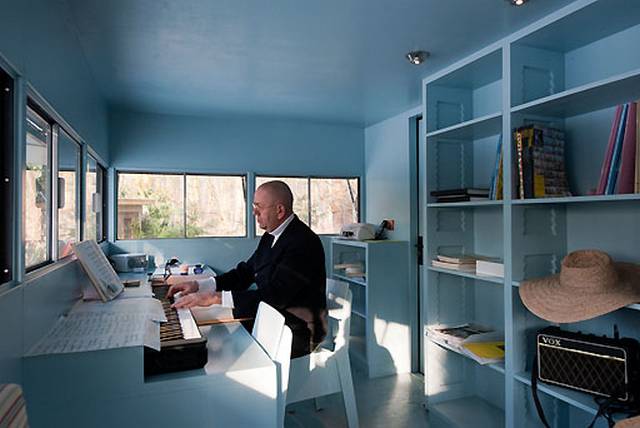 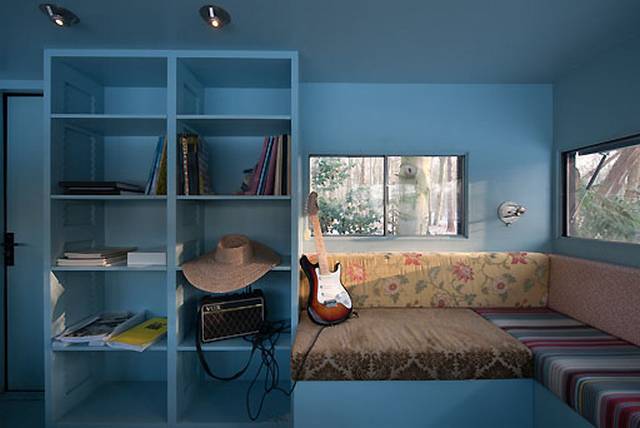 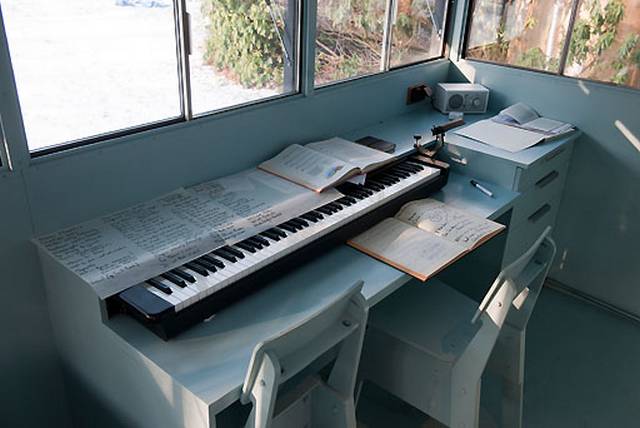 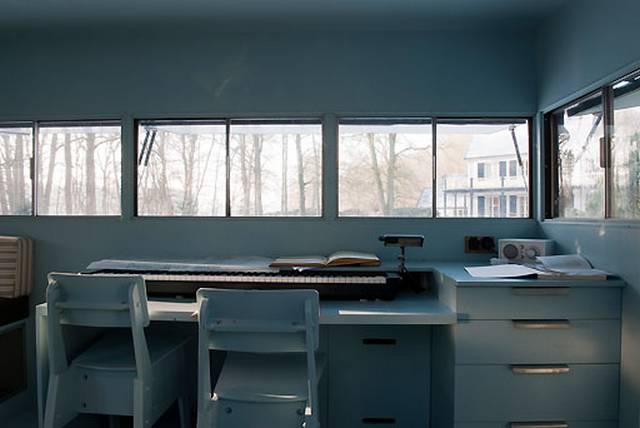 The Joshua Tree Boulder House proves imagination is still alive and well. Every inch of this 1700 square foot, 2-bed / 2-bath home is intentional, and every design element is deliberate. This magical creation sits on 2.5 acres in Joshua Tree, California. The house is the brainchild of W. Garett Carlson, ASLA, a licensed landscape architect for more than 30 years.  His landscape designs grace Hollywood’s recently remodelled Sunset Marquis Hotel, as well as the gardens of celebrities such as Jack Nicholson, Goldie Hawn, Johnny Depp, Blake Edwards, and more.  The house was built with sustainability in mind, using an intriguing palette of metal, wood, concrete and glass to create a peaceful modern living space where traditional boundaries are dismissed.  Ten-foot high, custom-made floor-to-ceiling pocket glass doors open to create a 40 feet wide expanse that connects the living area to the landscape.  A fire pit to one side of the patio, and a water feature on the other side are both set within boulders to further enhance the experience.  This is indoor/outdoor living at its best. 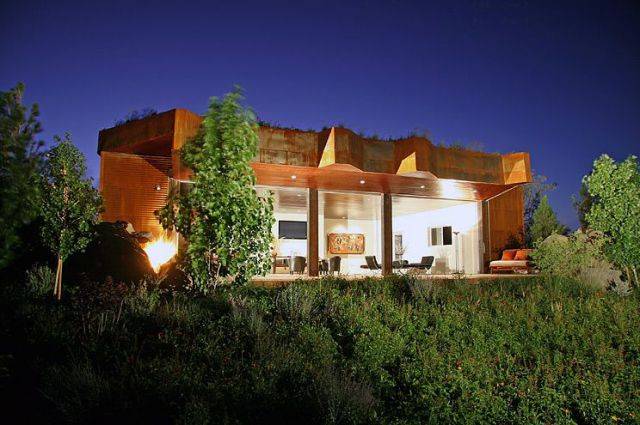 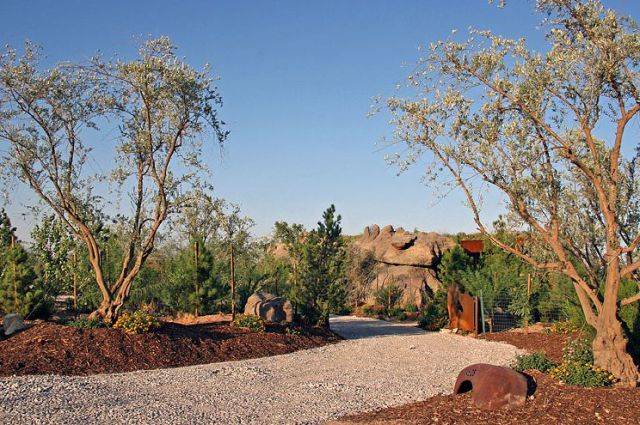 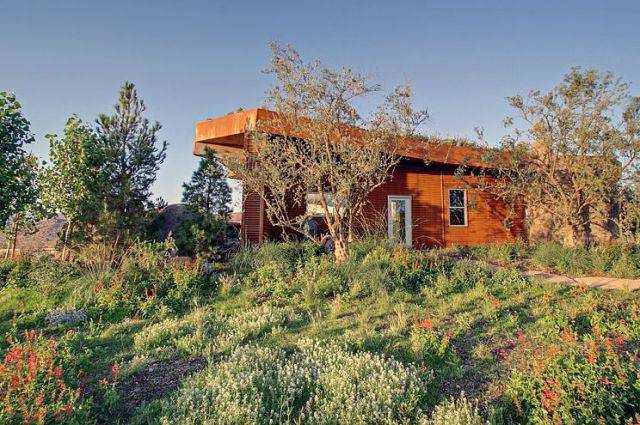 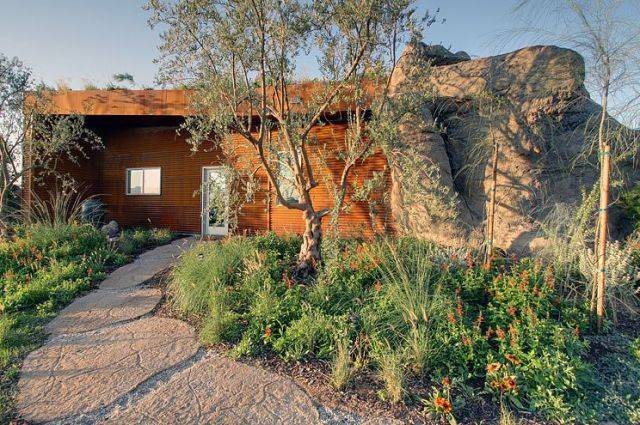 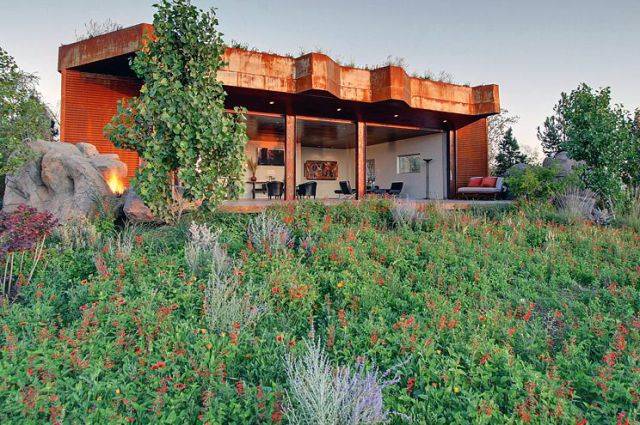 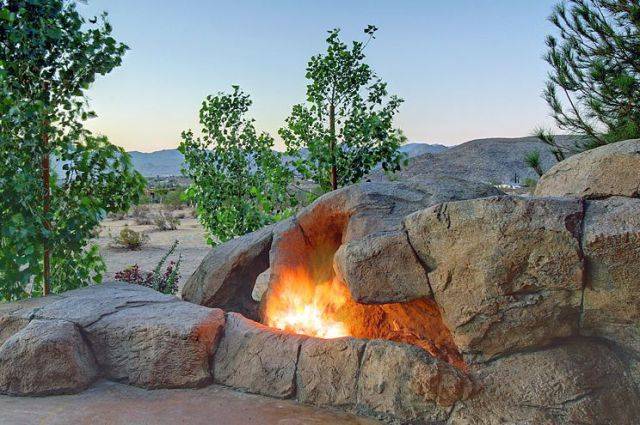 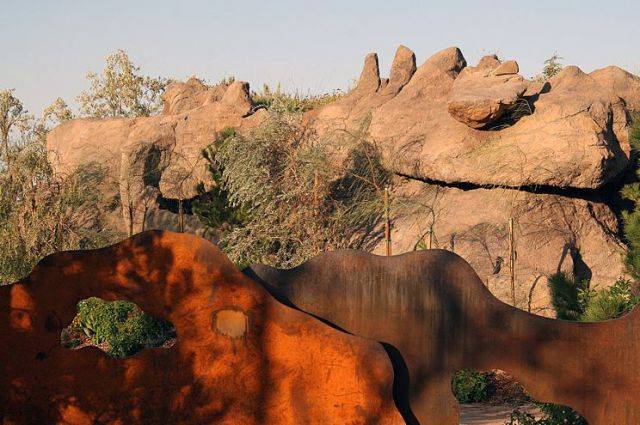 The roof of the house provides insulation in a novel way: up to 18” of soil covers the sloping roof, planted with a wide variety of native California wild flowers and grasses. Seen from above, the roof appears to be a part of its desert landscape. Structural steel I-beams support the 250,000 lb load, designed to withstand a 10-point earthquake. The roof has a 3’ pitch: 11’ on the east side, which also creates the space for the wall to wall 10’ sliding glass doors – down to 8’ on the west side. The pitch also allows the roof garden to drain.
Corrugated steel siding on the house and the garage is the highest gauge and quality available. 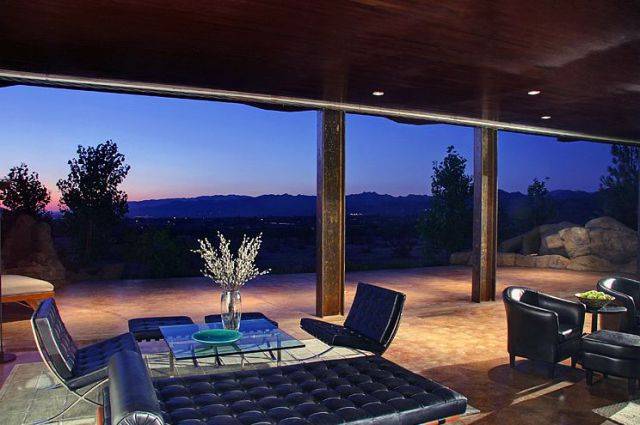 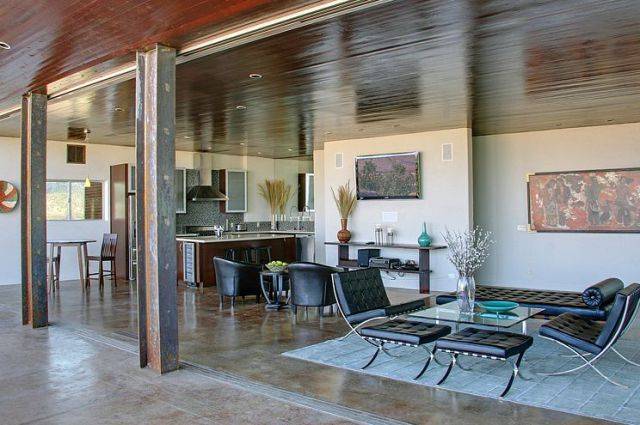 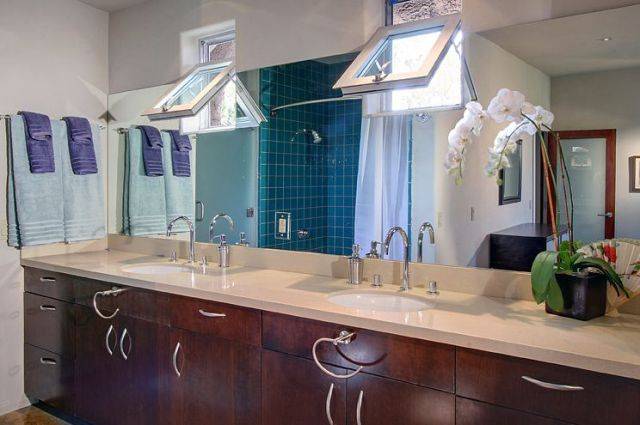 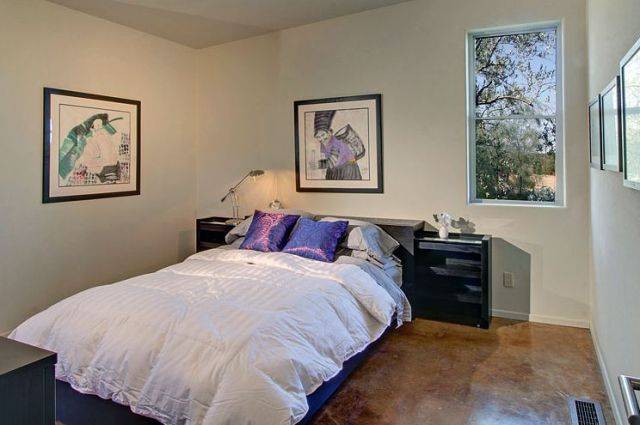 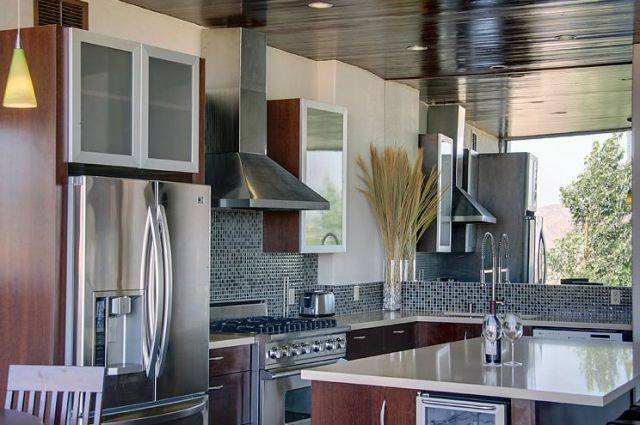 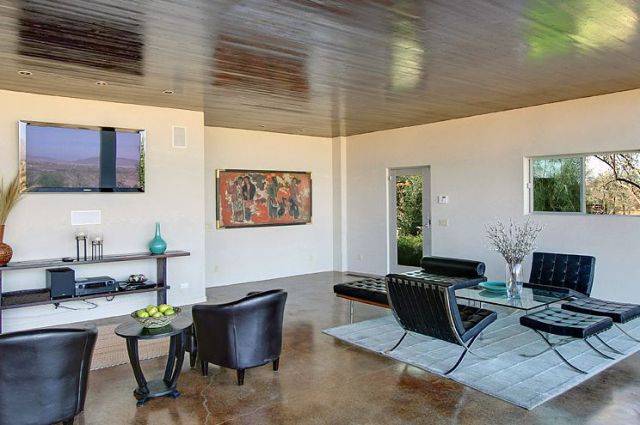 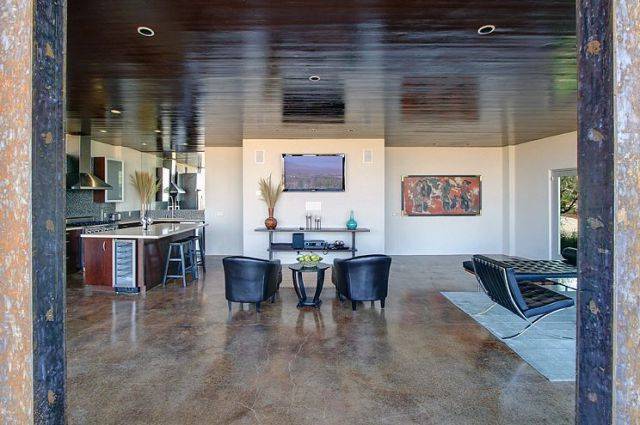 Inside,the floor’s surface was ground smooth , then sprayed with dyes to create a natural-looking surface. The floor was then polished and waxed to create a rich patina. The ceiling is tongue and groove Douglas fir, with several layers of dark stain and varnish to create a deep shine that subtly reflects the finish of the floor.
The kitchen features custom built dark wood and glass cabinets and state-of-the-art appliances. Bathrooms have custom cabinetry, Caesarstone counters. The master bathroom features a deep soaker tub surrounded by blue glass tile. Custom closet – off the master bedroom, a walk-in closet features custom shelving and drawers to maximize the space.