There is nothing like a long, hot shower to clear the mind and clean the body or a brisk, cold shower to cool one’s ardour or wash away the lazy, sweaty sheen of a summer’s day. Showers conjure all sorts of images from towel swatting in sports change rooms, to prison jokes, to sexy naked bodies to the famous Psycho scene. 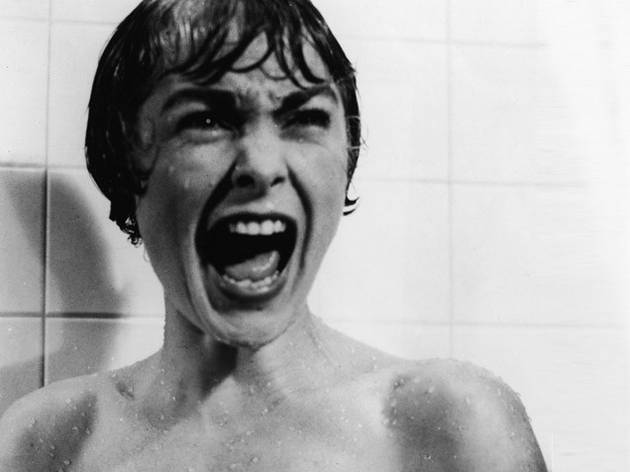 Used by ancient Egyptians and improved upon by the Greeks and Romans, indoor showers fell out of widespread use, much like other practices and technology, once those empires fell. It has taken a very long time for bathing and in particular showering, to come back into fashion and convenience. Suddenly we realise what we’ve been missing and showers no longer consist of a small hose attached to the bath or a pokey plumbing fixture in a tiny space. This article will make bathroom fittings look sexy, believe me! 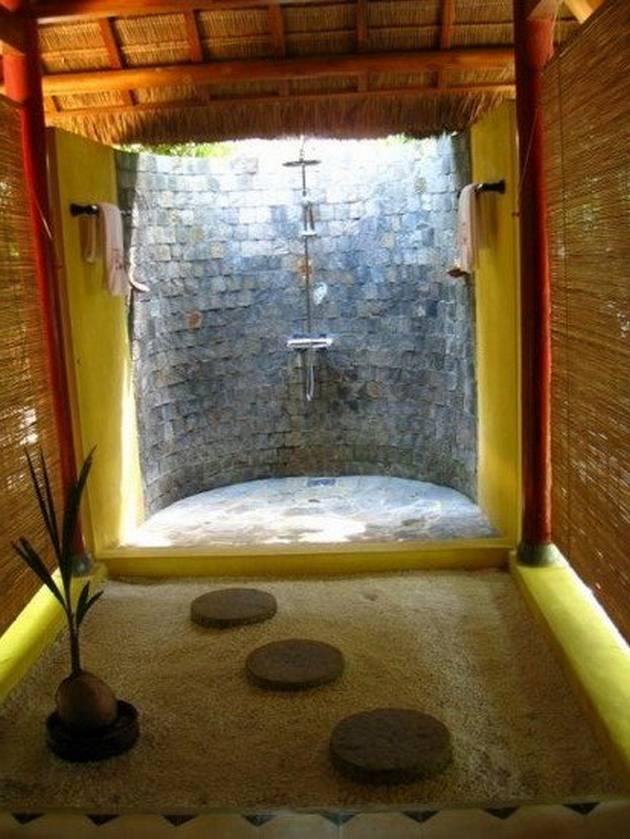 Showers are taking over the bathroom, often now called the shower room or wet room if there is no bath to be seen. Designers are creating waterfalls, rain sheets, light displays, self heating water systems and music player shower heads in pods, hanging hammocks and door-less works of art. It never rains, but it pours…

Here are 10 strange showers to wash away your Psycho fears:

1. The Tulip pod, designed by Piotr Pyrtek, obviously takes its inspiration from a tulip starting to bloom and is great for those lacking in space or wanting to live in outer space. It can be a bath or shower depending on whether it is open or closed. 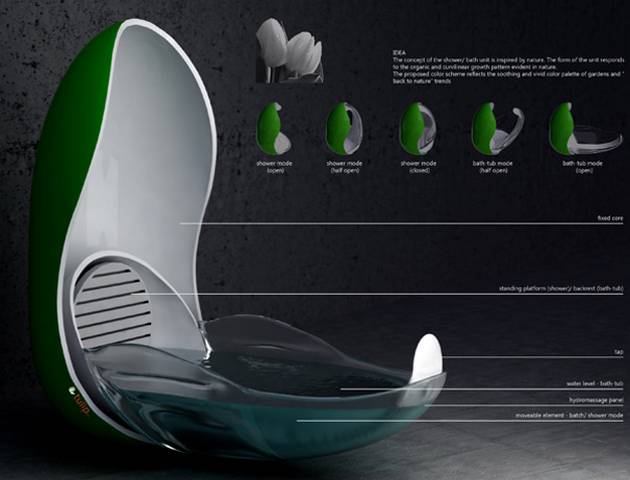 2. With space at a premium in many old and new homes, combination units could solve many a design problem. The sink, shower and space saving drawers all in one from Roca looks a little like a walk-through washing experience.

All in one electric shower 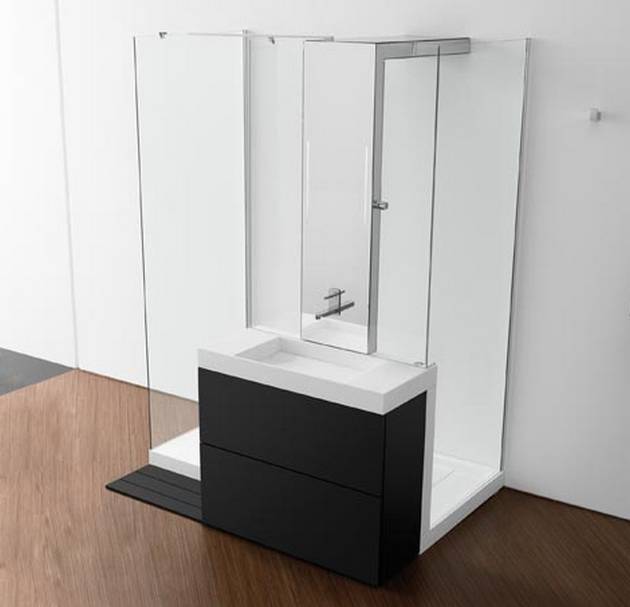 3. Love singing in the shower, but no speakers for your MP3? A range of attractive heads with adjustable water flow are available from Bossini with an added features of speakers and a connection for your ipod or other device. 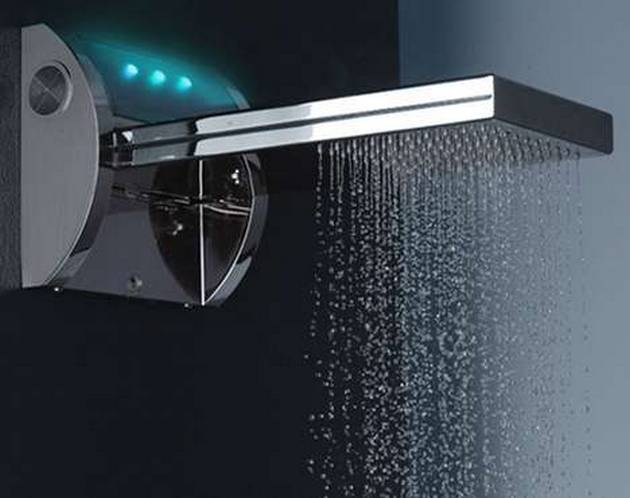 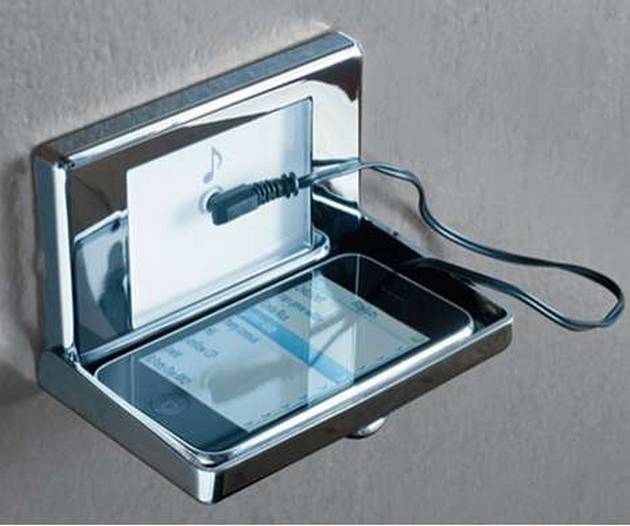 4. Now here’s a concept that turns showering on its head. Literally. The reverse shower can be used inside or out and the water sprays upwards from the base. It is certainly a space age design straight out of a sci-fi movie, but also functional, compact and perfect for claustrophobics.

Strange model in the marketing of this idea 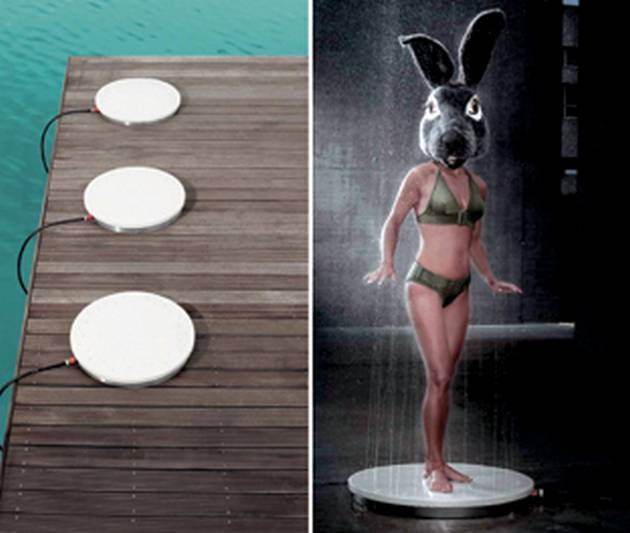 5. Water coming from just one direction not enough for you? 3D showers are here – this one sprays you from above, from the sides and from below so no excuses for not getting clean in here. 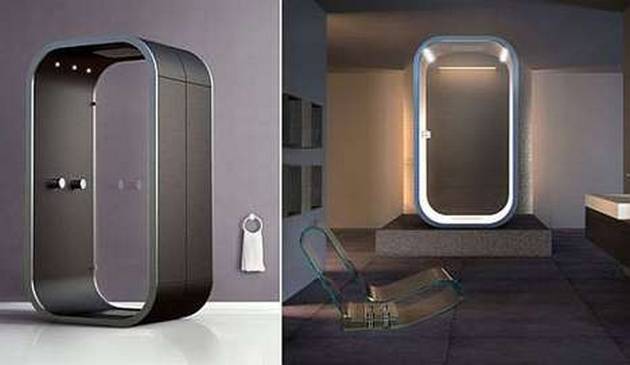 6. Water needs to be conserved and treated with respect. We can’t just assume because we’ve always had plenty of clean, fresh water we always will. Hard to get those teens out of the shower once they actually get in it? Don’t despair. These pads on a shower floor will slowly rise the longer someone stays in, until it is so uncomfortable they have to get out. A great concept to help save our planet from designer, Tommaso Colia. 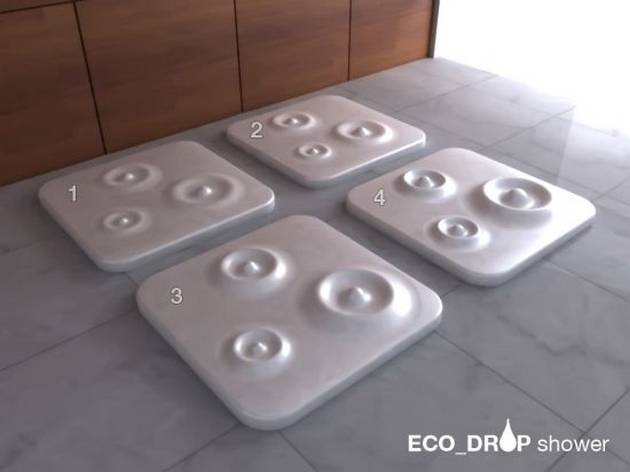 7. Another device for those water wasters is the inflatable shower curtain which blows up after four minutes. Best be quick if you don’t want to get trapped in plastic.

A short shower is a good shower 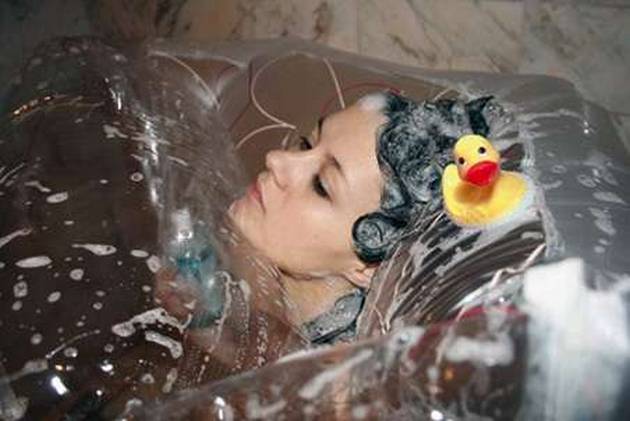 8. Whilst saving water is important, so is saving energy. This self heating system captures the energy as the water runs through it and heats it up. 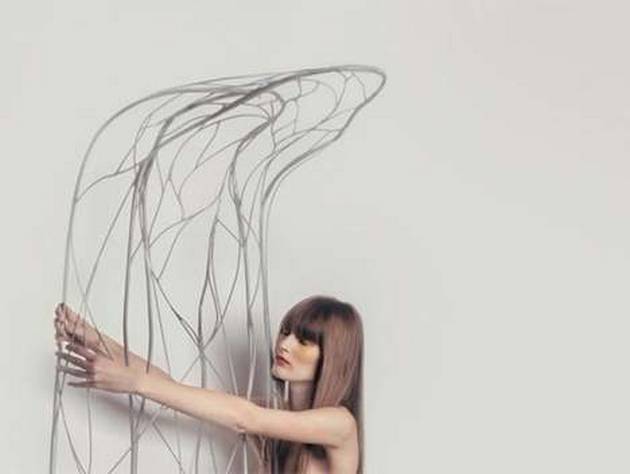 9. Feeling blue after being pushed out of your last shower and need a pick me up? Try a vitality red shower. Need some harmony? Try a green one. Chromatherapy or colour therapy uses light and colour to relax and balance energy. The Kos shower cabin also has revolving jets for hydromassge and a Turkish bath steam room feature.

Colour therapy while you shower 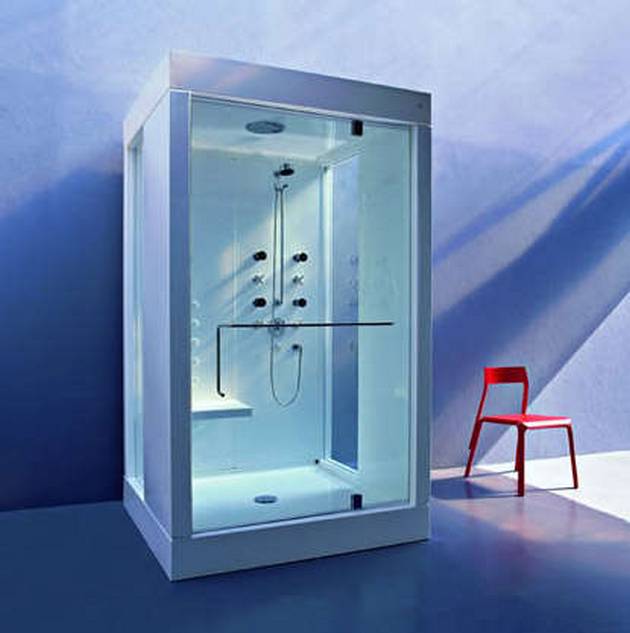 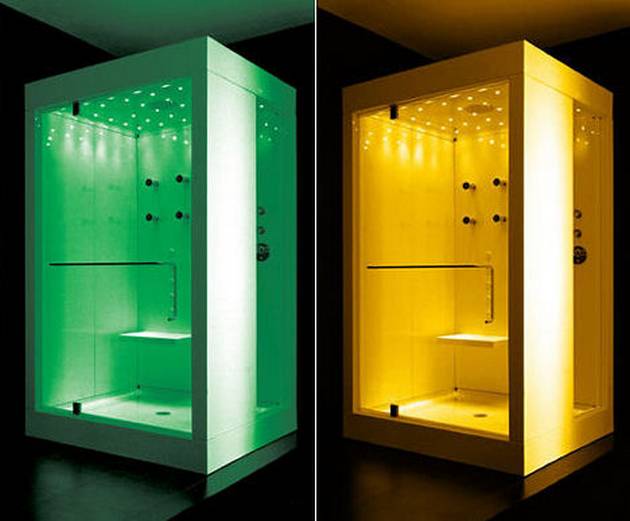 10. When your shower comes with a control panel, ‘scenarios’ and ‘sequences’, you know you’ve made it to shower heaven. From Dornbracht, this multi-senses shower concept combines nature and technology. You choose a sequence that automatically starts the rain curtain, head and body sprays, mist, lights and fragrances. It doesn’t get much better than this. 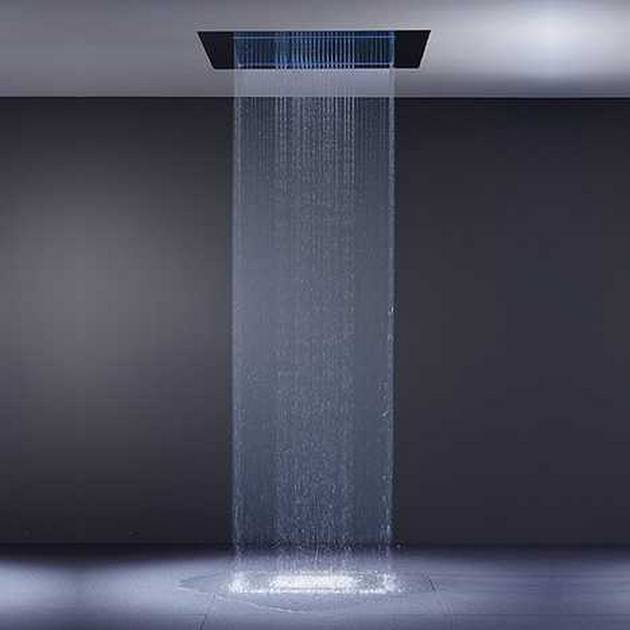 And one more thing, just when you thought it was safe to go back in the bathroom, a shower curtain to make you scream. 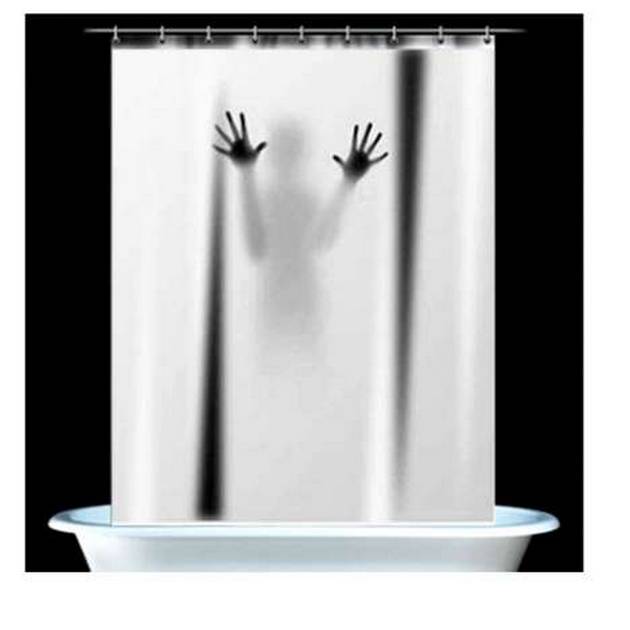 suhail ajmal
Suhail is a father of three who loves nurturing them day and night. Profession wise he is a recruitment consultant with strong interposal skills. He likes to share his tough life experiences with the world and save people from those troubles he had to run into.
Previous articleHouse-Museu Opened After 100 Years
Next articleMultifunctional Bench Coffee

Bathroom tiles are one of the best and most essential features of your bathroom. You can see it in the powder area, floors, walls,...